You are here: Home / Garage Storage Systems / A Brief History of Garages 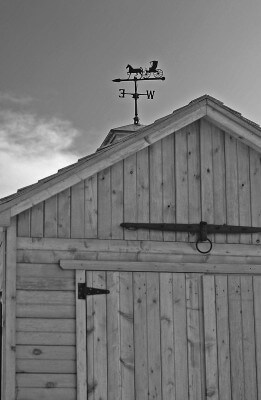 Over the next few weeks, I’m going to discuss the evolution of garages: from sheds to what have been called ‘Garage Mahals‘, home extensions that contain everything from work stations to interlocking floor tiles to hydraulic lifts.

The word garage comes from the French garer – to shelter or protect.  It’s an apt name because that’s effectively what garages do.  They protect our cars from the elements.

During the early part of the 20th century, cars weren’t that common because they were expensive.  The first garages were just converted carriage houses that were remodeled to fit cars rather than horses.  Garages that were designed for cars didn’t become common until the early 1920s when car sales increase.  However, demand grew quickly.

By 1925, in fact, garages were on people’s must have lists. According to the June 1925 issue of Atlantic Monthly, ” the first question asked by the prospective buyer is about the garage.  The house without a garage is a slow seller.”

These garages were mostly stand-alone structures, built away from the main house. It wasn’t until the early 1950s that builders started to incorporate garages as part of the house design.  Before this, drivers had to brave the elements when getting from their garage to their home.

Carports became popular in the 60s as a low-cost alternative to a garage – often just roof and four posts, they were popular in warmer parts of North America.

The next major change happened in the 80s.  Garages were built to be conspicuous and large, to make room for families with multiple cars. Thankfully today they’re now being built to be less obtrusive.

The first patent for an automatic garage door opener was issued in 1937, but oddly enough, it didn’t really become popular until the late 1960s.

Fun fact: many businesses have been started in garages, including Hewlett Packard, Walt Disney, Apple Computers and Motown Records.