Steps of the TRANSFORMATION

We created a custom design to accommodate customer needs including slatwall, organization accessories, overhead storage and matching the slatwall and flooring to complement the external stone of the home.

We have lived in our home for several years but have never fully utilized the space available in our garage, nor were we happy with the untidy floor. Rick designed our space to allow us to park both cars while still being able to have easy access to our bikes and tools. His custom design was respectful of our budget and included a simple workbench and work station. This was made possible by rerouting our central vacuum completely across to the other side of the garage where there was dead space. Our new floor looks beautiful and we no longer have to keep 1 car outside!

After spending time and money to renovate all the rooms in your house, you don’t want your garage to feel like an afterthought. Combine a lack of aesthetic appeal with no organization system and you’re ready for a garage transformation. This is the situation I faced with some recent clients. 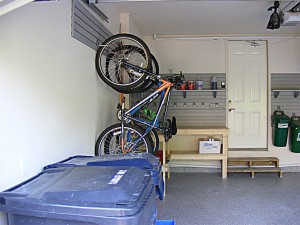 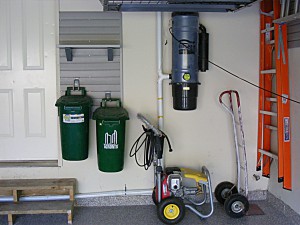 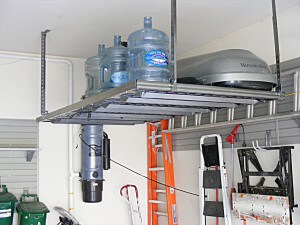 Often when I meet with new clients, they are at their wit’s end with the clutter in their garage, but that wasn’t the case here. This professional couple with two teenagers simply wanted their garage to reflect the rest of the house. It had to function according to their needs and look good.

The rest of the house had been renovated and now they wanted to transform their garage.

Our goal was to organize the stuff they had, allowing for two cars to be easily parked inside, build a work bench and install a floor. They could have done more, but the budget wasn’t a blank cheque.

The garage measures nineteen feet wide, twenty feet deep and nine feet high, which allowed for what they wanted to do, which appeared to be simple and straight-forward.

The first thing we did was move the central vacuum cleaner from the left side to the right to make space for the work bench, rerouting the tubing and piping across the top and bottom. This is where we ran into the first glitch. We discovered that the original installation for the central vac was done incorrectly. The connection inside the wall was very loose. When we started moving pipes, the connection came loose inside the wall. Luckily, we were able to access and fix the problem through the garage wall.

Once the vacuum unit was moved, we had room for an L-shaped workbench with a storage shelf. The workbench was installed on the left side of the garage because there was a 30 inch return on that side.

We then needed to find storage for bikes, tools and garbage cans. In order to figure out where best to store these items, we had to know how the couple parked so that the driver’s side doors were protected.

Because of the large return on the left side, it made sense to store the bikes there. We installed one row of slatwall to hang the bikes on. Closer to the garage door are the large recycling and garbage bins, stored for easy access.

Along the back of the garage are shelves for storage as well as some slatwall and hooks for their organics containers. To accommodate their thule and water jugs, we put in some overhead racks from the ceiling.

On the right hand side of the garage, there was much less of a return so we installed slatwall and hooks for garden tools, shovels and ladders because they lay flatter against wall.

A lot of thought went into the aesthetics. Because the exterior of the house is a natural stone in beiges and browns, the floor has a Bristol finish with tan, white, blue and grey flakes. The slatwall is grey to pick up the grey in the floor.